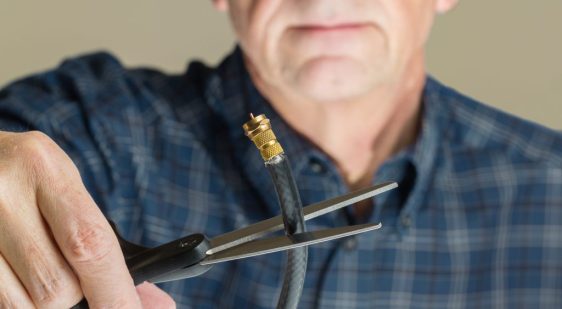 The way people consume television in this day and age is much different than years past due to the advancement of technology and the rise of streaming services. While most households still use traditional TV services, there has been a drop in cable subscribers within the last decade. In the last few months of 2017, 79% of American households subscribed to pay TV services such as cable or satellite, compared to 88% in 2010. The numbers continue to decline as technology allows more people to “cut the cord” – and cord cutting is here to stay. Research group, TDG, predicts that in 2030, approximately 30 million households will be living without pay TV service.

With nearly 200 channels available through streaming services, traditional cable is waning. In 2017, cabletv.com calculated the average price of purchasing TV service at $72.60 per month. That average comes from nine of the US’s biggest television providers, and it’s a significant amount for many households.

But it’s more than just cost. Today’s viewers watch TV differently than they did just ten years ago. The proliferation of mobile devices makes it easier for us to get the entertainment we want when we want it. Why race home to watch a movie on HBO when you can stream one on Netflix or Amazon Prime Video? Why schedule time to watch your favorite network sitcom when it will soon be available commercial-free on Hulu?

What’s more, the literal cords involved in home entertainment can be a headache. All the wrangling of cords and hassling with DVR programming is just not worthwhile when there are more high-tech, easier-to-use options available. HDMI connections are great, but there’s no longer any reason for a physical cord. In addition to dropping their expensive TV packages, people everywhere are actually doing away with annoying cables.

Streaming internet content is here to stay, no question, but people still love to lean back in their home, curl up on the couch and enjoy content on the big screen. With the advent of Miracast, and products like the ScreenBeam Mini2, people get the best of both world – a simple way to wirelessly enjoy content on any HDMI equipped big screen display.

Ready to cut the cord on your cable TV?

If you’re an avid user of streaming services and tired of having your TV viewing space littered with cords and cables, it’s time you consider cord cutting. Using the right devices eliminate the hassle of needing extra cables and allow you to easily watch content anywhere.

Here’s how it works.

With a ScreenBeam Mini2 connected to your television, your mobile device or laptop beams content directly to your TV via Miracast – no WiFi needed! It’s like connecting your device to your TV with a cable, but there’s no cable.

It’s that simple. You can stream your favorite shows, show photos and videos, or play music on any TV without the need for cables or routers. Plus, you won’t have to deal with Wi-Fi-related lag and buffering. You can watch tons of movies and TV shows without the expense and hassle of a multichannel video programming distributor. Essentially you get what you want, where you want, when you want without having to sacrifice the awesomeness of your big-screen (when you want). itThat’s what cutting the cord really means. No more cable or satellite service, and no more cords getting in your way.

Millions of people have cut the cord on cable. They’re tired of the shenanigans and expense of traditional television services. Their tastes are evolving, and the technology is keeping up, making cable cutting a reality. It’s a great time to cut the cord—in more ways than one.

Get the ScreenBeam Experience. Request a trial

Our new USB Pro Switch was awarded Best of Show under the category AV Technology at #infocomm2022! Thank you… t.co/JUQVk9YZdQ

On day one of #InfoComm22, we're hanging out with @ScreenBeam. Stop by booth #W1429 to check out the new USB Pro Sw… t.co/TCnawQXl0H